Between full-time work, indoor projects, maintaining the established beds, and waiting for the budget to build back up, the gardens at our wabi-sabi cottage can be slow growing. Shopping places like Habitat ReStore encourages patience since resale and reused materials won’t show up in the correct clusters, so prioritizing projects can be dodgy, but I have learned to maintain lists and keep major project ideas in mind as I go about my life.

Our cottage is now on a double lot, having acquired an adjacent lot recently at a city tax auction. The neighbor across the lot is rehabbing his house. As in, to-the-studs rehabbing… New technology going in means neither original chimney is needed, and he wants to recoup the space from both.

Having watched the first chimney downed from the roof get hauled away to the dump left me kicking myself for not speaking up. In the realm of reusing material, action must be swift, because materials move more swiftly. 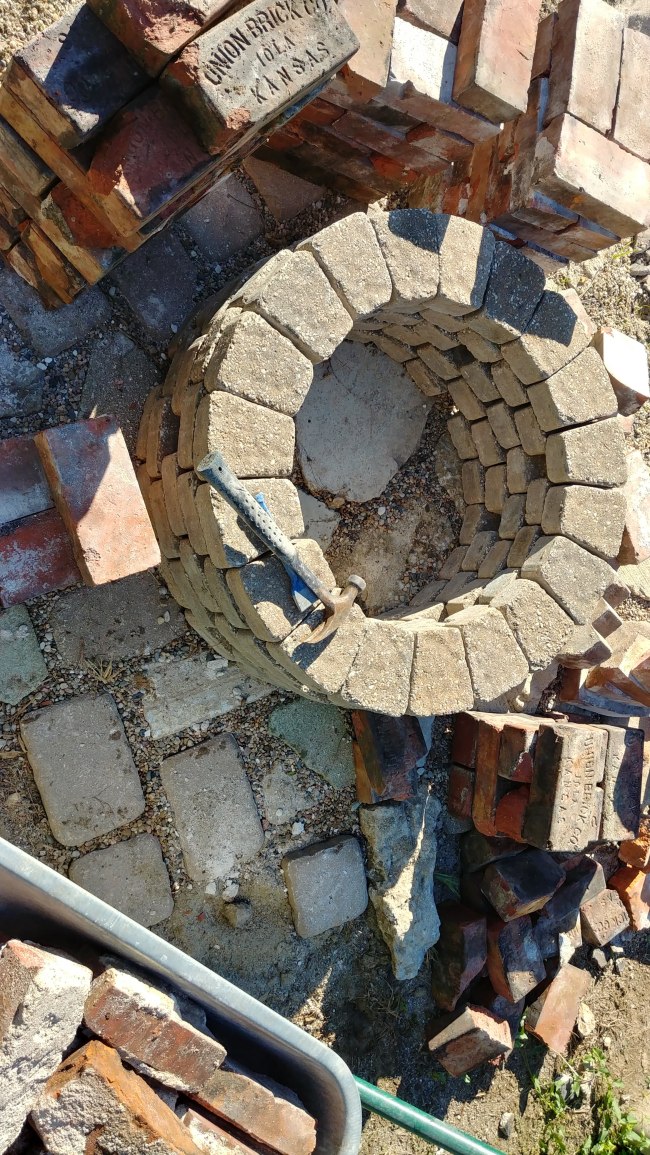 I learned from that first miss. As it goes, he had no plans to reuse any of it. I asked, he offered gladly. I have spent a chunk of my weekend chipping old mortar. I have to say, the lost outer chimney brick is a damned shame, since those bricks are study beauties, “UNION BRICK CO. IOLA, KANSAS” stamped into the face. I landed a decent pile from the second chimney though; priority placement will still make a great impact. 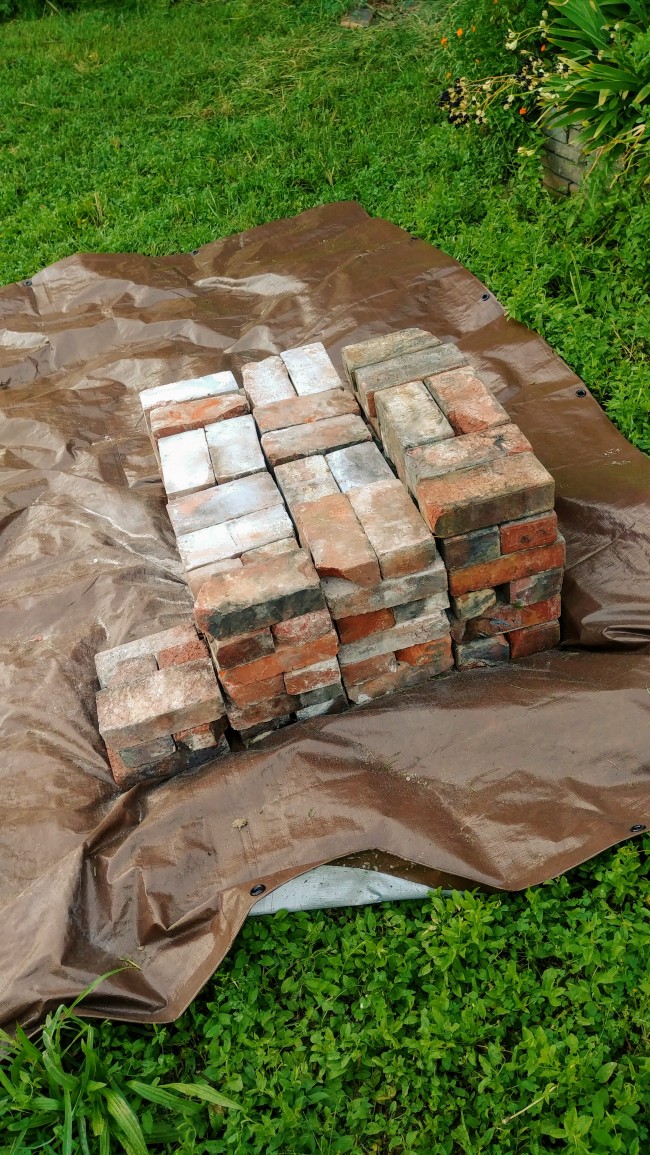 As I get to the brick closer to the fireplace and furnace, the mortar crumbles easily under the chisel. I would love to think that the white-washed tone would carry into our pathways, but I suspect it will wash off in the first rain. The soot-and-char blackened bricks might hold onto their character indefinitely, so that helps with the loss. 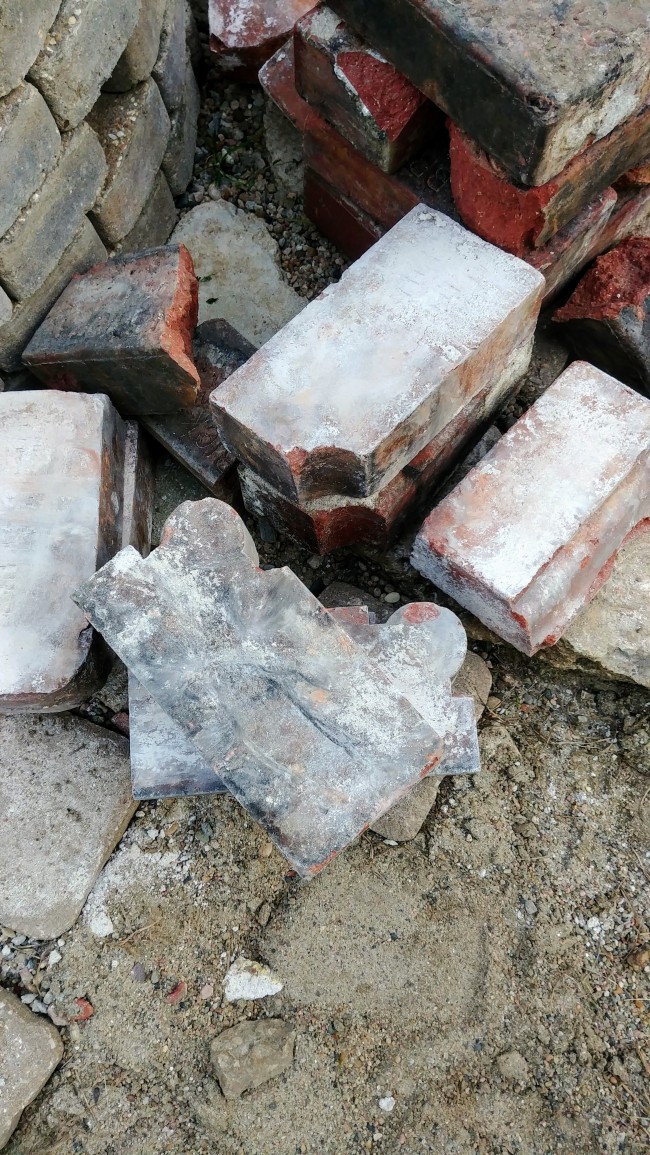 Additionally, as I chipped my way into the pile, many bricks with odd shapes surfaced: mouldings, rails, rounded corner, saw tooth. As I worked, I had the epiphany: these were scrap bricks, used to fill the chimney stacks of the neighboring house. There was no fancy brick mantle when I was offered a house tour. Plus, the mortar placement told me the fancy details were buried in the stacks. 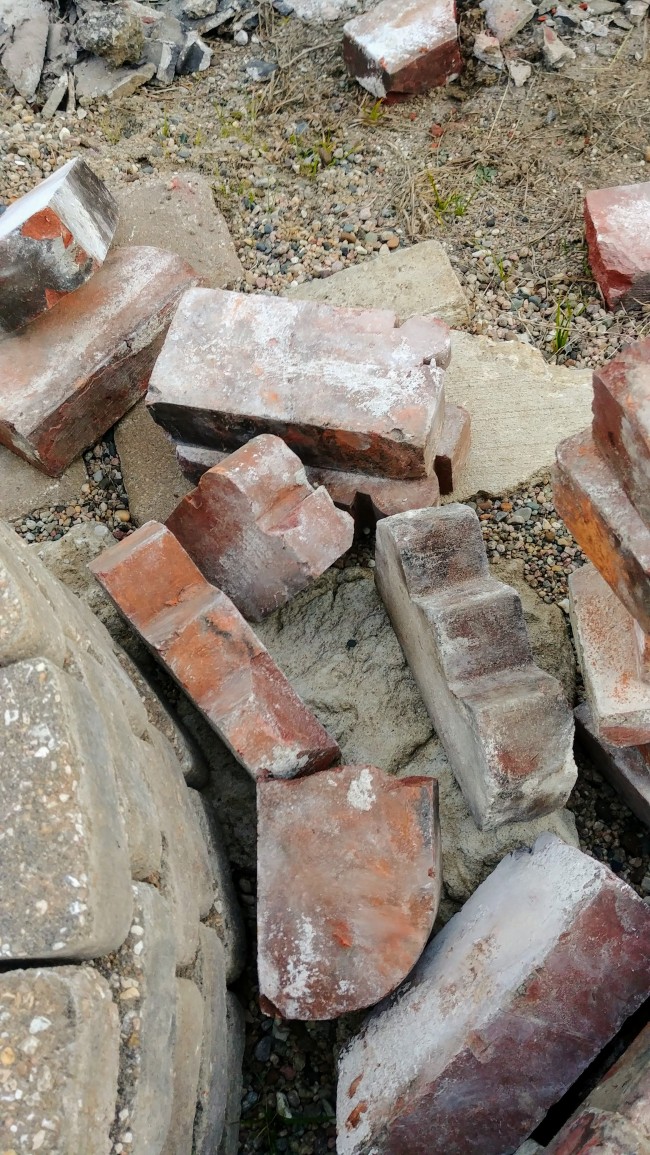 These buried characters have endured ninety years of obscurity, waiting for an opportunity to show off their charm and beauty. And they shall have it, as they pave the way further into our wabi-sabi life. 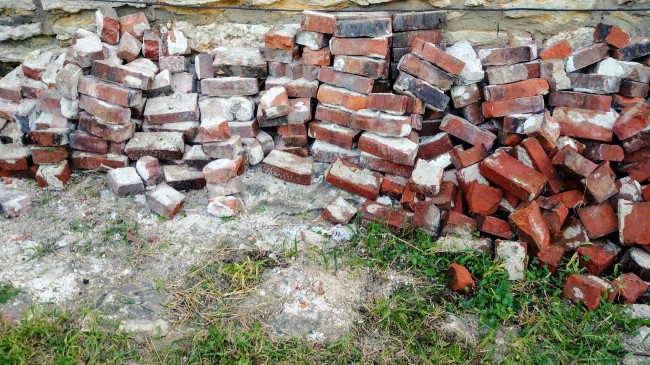